Two of my top  MI artworks of all time have also been the longest and potentially the most boring. Yet I was gripped for over an hour by Tacita Dean’s Fernsehturm (2001) and  Mark Wallinger’s When  Parallel  Lines Meet  At  Infinity (1998­-2001). Although both films are perverse in their apparently arid visual content and are restricted to a single take from a static fixed camera, their pace and rhythm create an almost hypnotic state that transfixes the viewer. In Wallinger’s film we get a driver’s eye view of the Circle Line tube as it completes its full circumnavigation. We are lulled into a state of mindfulness by the train journey’s rhythm of starts and stops. In Dean’s work we see the view from the revolving restaurant of the iconic TV tower in East Berlin. As it makes its barely perceptible rotation, dusk falls and the glowering light gives the cityscape below an eerie fascination. In both instances the exposure to narratives so slow and lacking in incident produced a strange effect on me. I might have chosen to leave after a few minutes thinking that I had got the drift of the artist’s intention. But in these works the focus and curiosity of the viewer is captured and you enter a dimension of uncanny, Zen-like timelessness. It is as if our brain’s defensive reaction to the numbing boredom is to heighten the acuity of our perception and  we enter a hyper vigilant state of consciousness where the search for subtle distinctions is totally absorbing. Ragnar Kjartansson’s nine channel film installation The Visitors at the Barbican Gallery this week was a similarly enthralling experience

One of the many manifestations of Kjartansson’s perversity is in making an hour long live music video that consists of eight musicians that remain isolated from each other in separate rooms whose only communication is through headphones. A drummer , a cellist, an accordion player, several guitarists and two pianists  each have their dedicated screen and loudspeaker. The disconnect which Kjartansson has exploited in his direction of the piece has some electrifying effects. At times it feels that the music is about to fall apart under its own fragility. At other times the beauty of singers fighting blindly against each others harmonies creates a crazed surface to the sound. The eight bar chorus in  waltz time seems to give the musicians the freedom to extemporise and although repeated hundreds of time over it never flags.

When I saw this work last year at the Brewer Street Car Park under the auspices of the Vinyl Factory the lyrics :”Once again I fall into my feminine ways” seemed to be a  joyful assertion of the value of  gender fluidity. Other critics have described it as a melancholy dirge, whose lyrics were written by Kjartansson’s ex-wife following their break up. But for me the underlying message of the work  is the sense of community and reassurance that music can instill in both performers and audience. We get visual confirmation of this as one by one the musicians leave behind their individual “sound booths” and their instruments and make their way outside still singing and dancing across the countryside. In parallel as the rooms empty the audience follows the musicians eventually gathering in front of the single screen watching the rag tag ensemble disappearing into the distance. No one seems to want to leave as long as the barely audible singers are in earshot. This level of audience solidarity is unique in my many years experience of video art . 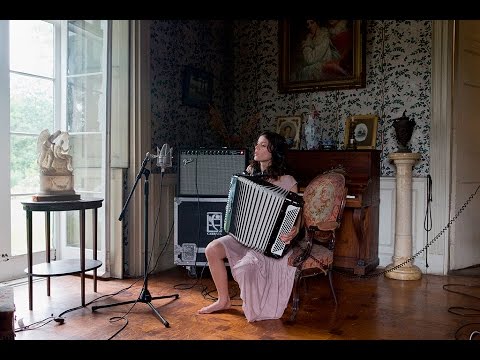 The most astonishing fact about the European Cup drama  was not that England lost but that a tenth of Iceland’s 330,000 population had been at the game.  “It’s a small place ” said a couple from Reykjavik who managed to get tickets to the sell-out match at the last minute. They knew one of the players. The ability to relax the grip on their egos  for the sake of a bigger enterprise is a key lesson to be learnt from the cool, yet warm, Icelanders.(see my previous post on the Vasulkas)

Next month MI art lovers will have a chance to experience the kind of selfless bonding that secured Iceland’s win by spending time in the multi screen film installation The Visitors  at the Barbican Art Gallery. Devised by the Icelandic artist, Ragnar Kjartansson, this is an hour long music video (of sorts) with a compelling message about gender identity. You are drawn into that strange empathy that musical ensembles must embody, harder to achieve in this set up as the musicians are all in different rooms. In the subtlest possible of ways Kjartansson  physically manipulates his audience into a position of community solidarity, something we could all do with at the moment. I do not wish to spoil the surprise of how he achieves this, so my full review will wait until after the opening on July 14.  Go see.