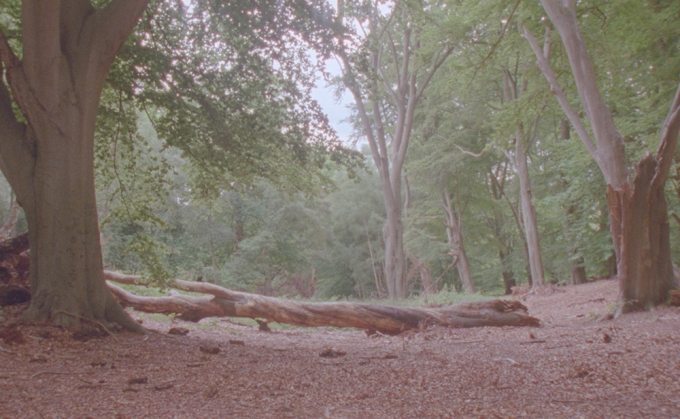 Alienated body identity is a touchstone of contemporary art. It could have been the selected theme for this year’s Jerwood/FVU Award but the organisers broke with tradition and instead of proscribing a given topic selected two projects from the 344 entered for consideration proposed by the artists Michael. and Soojin Chang. Michael. has followed Malcolm X and some feminists in dropping a given surname to shed its patriarchal/colonial connotations. These artists converged on this popular contemporary theme for exploring race and gender but they have produced two very different films, one on the black male body and the other on the reproductive identity of the female body.

Some will feel that at 35 minutes long these films outstay their welcome. However, others may have been gripped by the lurid images of Chang’s film or hypnotised by the meditative atmosphere of Michael.’s. I was not bored by either film but it would have been interesting if they had enlisted the judicious eye of a gnarly, old-school film editor among the many collaborators they commissioned. An implicit recognition of this is apparent in previous Jerwood Award films that usually come in around the 15- 20 minute mark. In previous posts on mialondonblog I have discussed the two moving image artists on the selection panel, Rehana Zaman and Hetain Patel who produce exemplars of concise, punchy, well paced films. Previous Jerwood Award films also often deploy some form of structuring device to create some sense of narrative flow. The three contrasting movements of Alice May Williams’ Dream City (2016) comes to mind. Moving image aficionados like me will often sit through repeated viewings of shorter works to extract their finer points but this would be a major time commitment for films of this length.

What appears to happen is that the generous £25,000 award excites a restless, uninhibited, free ranging creativity encouraging the import of a wide range of collaborators and expensive equipment. As a result both films have some striking elements but their overall impact is rather diffuse and the artist’s aims are hard to pin down. I am reminded of the wise words of the moving-image pioneer and educator, John Smith, that “it is possible to make exciting work with very limited resources and that good ideas are more important than big budgets”. There are many interesting ideas embedded in these films but it is down to the viewer to draw a coherent sense from them.

Soojin Chang’s BXBY will be reviewed in a subsequent post so I will focus here on Michael.’s cleave to the BLACK. This is a beautifully conceived and implemented 16mm film triptych, the lack of voiceover allowing the viewer to project their own interpretation. In the central screen we get a gentle tour of very English verdant scenes in colour contrasted with flanking screens in black and white which offer similarly sedately paced meditations on the black male body. One replays the moving image trope of the sleeping man which more often features white bodies (the obvious reference is Sam Taylor-Johnson’s famous 107 minute video portrait of David Beckham from 2004). The other screen shows the side view of an external staircase of a council block up which a succession of black males of various ages, shapes and sizes very slowly pace and disappear along a open balcony.

Slowed down action was pioneered in video art by Bill Viola but in his case it was the film that was slowed in post production digital manipulation not the actors movements themselves. In contrast Michael. commissioned a choreographer to teach his team how to move as if in a slo-mo. The agitated waving of the windblown foliage in the foreground is the clue that the action has not been slowed digitally. The artist is on record as viewing this need for mindful slowness as an antidote to the vigilance required by young black men in an environment of police surveillance and ethnic profiling. For me it also has a more sinister significance referencing the high incidence of psychotic illnesses among black men probably skewed by racist psychiatric overdiagnosis. Overuse of anti psychotic drugs can sap the patient’s energy and massively slow motor coordination.

The rural scenes in the central screen may be offering up the balm of nature in a hostile urban environment and the contrasting relaxing and urgent interruptions on the cleverly designed sound track support this. But again there is a more unsettling resonance for me. I am reminded of the stance of two prominent black activists: the politician David Lammy politely demolishing the argument of a radio phone-in caller asserting that Lammy may be a British citizen but can never identify himself as English (i.e Anglo Saxon) and the film maker Jenn Nkiru in her film Black to Techno (2019) referencing the present day echoes of the bereavement of the slave trade when the African population was wrenched from their cultural homeland creating a diasporic rootlessness. The only human appearance in these idyllic scenes is for a split second. A black man walks into shot. Does he feel accepted or acceptable in this quintessentially English landscape?

A similar question about brown male bodies is also posed by a previous Jerwood Award winner, Imran Perretta, in his film the destructors (2019) which is inspired by the public reactions to young Asian men in the wake of Islamist terror attacks. His memorable statement that “my body was perceived as a weapon and because of this it would never wholly belong to me” beautifully encapsulates this sense of alienation.

The pioneering figure in the portrayal of the black male body in moving image is of course the Oscar winning film director Sir Steve McQueen. Vulnerability and stoicism coexist particularly in his early 16mm black and white films such as Bear (1993) which features an ambiguous erotically charged wrestling match between two black men. Western Deep (2002) was also shot in 16mm but, unlike cleave to the BLACK, presents black male bodies in the stereotyped role of manual workers in a goldmine undergoing considerable physical stress. The black body at rest is also a colonial era stereotype with its associations of lassitude and it strikes me that “othering” creates this harmful dichotomy within the outgroup so that their search for a more nuanced identity is harder to attain.

This is the eighth year of reviewing the Jerwood Award on mialondonblog so it is interesting to track the the trends. It seems emerging artists increasingly feel that narratives are implicitly dishonest and a distraction to the pursuit of their artistic vision. I can’t help feeling that this is a reaction to the sense that clear narratives belong to a different world, a more predictable and stable one that has now passed into history. The other striking features this year were the extended lengths of the films, the move away from overt political issues towards a focus on the artist’s personal identity and the high spec sound design which would rival many multiplexes. However the selective sample and the idiosyncratic features of the Jerwood Award commissioning process means that caution is advisable before generalising these trends to the wider moving image art world.